Food loss and waste refers to food that can still be eaten but is thrown away. It is said that there are food loss and waste with 1,300 million tons each year globally. And while Japan has a low food self-sufficiency rate at around 40% and depends largely on imports for its food, more than 6 million tons thrown away each year. On the other hand, the problem of hunger also continues to exist in the world. There are thought to be about 800 million people without access to adequate nutrition.
The Nissui Group, as part of its corporate responsibility of a company handling food, has designated food loss as one of its key issues. Mainly through the Food Loss and Waste Subcommittee, we are addressing this issue throughout the supply chain, including raising the awareness of its employees and activities involving the general public, as well as reducing loss in the conventional stages of production, distribution and consumption.

Reduction of Food Loss and Waste Throughout the Supply Chain

* Food bank: A group which brings together food products with no quality problems but are unsuitable for sale, and people who can’t obtain enough food.

In Japan, the Act on Promoting Food Loss and Waste Reduction (Food Loss and Waste Act) was promulgated in May 2019 (enacted in October 2019). We are making more proactive efforts than ever before to contribute to the SDGs target of halving global food waste by 2030 mentioned in the above Act, as well as to seriously address our obligations as a business operator under the law.

The Food Loss and Waste Subcommittee, chaired by the Executive Officer, is engaged in initiatives to reduce food loss and waste in the businesses across the Group companies in Japan and to raise the awareness of the employees. 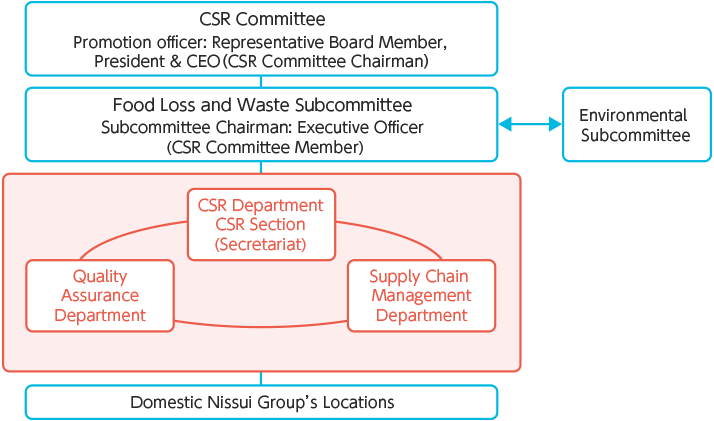 Medium- to Long-term Targets for Food Loss and Waste Reduction

The Nissui Group established its own definition of food loss and waste (Note) and set reduction targets. Our vision for 2030 is to have initiatives in place to reduce food loss and waste throughout the entire supply chain, and we have begun working toward this goal.

(Note) The Nissui Group’s definition of food loss and waste: Waste from animal and plant residues (excluding inedible parts of fish, vegetable cores, outer leaves, and similar wastes arising in the production process) and products that can be reduced through self-supporting efforts.

Nissui is going forward with initiatives to change the labeling of best-before periods in an effort to reduce food loss and waste. All tinned food products excluding private-brand items manufactured on and after July 1, 2019 are labeled with best-before periods expressed in year/month (labeling format has changed from the conventional year/month/day to year/month.) In this labeling process, storage tests were carried out to check how long quality can be maintained, and it was confirmed that the best-before periods could be extended. As a result of these efforts, we can expect more efficient distribution as well as the reduction of food loss and waste on the entire supply chain. The Nissui Group has also begun efforts to significantly extend the best-before periods of other products including frozen prepared foods for retail and commercial uses, bottled foods, and pre-packed foods.

Adoption of a Garbage Disposer

In fiscal 2019, the Nissui Group company, Kaneko Shokuhin Co., Ltd., promoted the recycling of animal and plant residue through the adoption of a garbage disposer. Kaneko Shokuhin manufactures frozen prepared foods and in the production process, generates approximately 800 kilograms of “oniba (Note)” inedible parts of its raw material cabbages per day. Previously, Kaneko Shokuhin had asked designated farmers in the area to collect such waste for composting. However, year-round recycling became difficult due to the quick rate of decomposition during the summer months (July through September) and other reasons and a part of the waste could not be composted and had to be disposed of by incineration. Therefore, the company adopted a garbage disposer with a maximum 1,000-kilogram processing capacity and began processing the outer leaves and hearts of cabbages generated within the plant. As a result, in fiscal 2019, Kaneko Shokuhin was able to reduce the cabbage disposed of by incineration to approximately a tenth of the previous volume.

(Note)“Oniba”: The outer leaves and hearts of cabbage and lettuce. 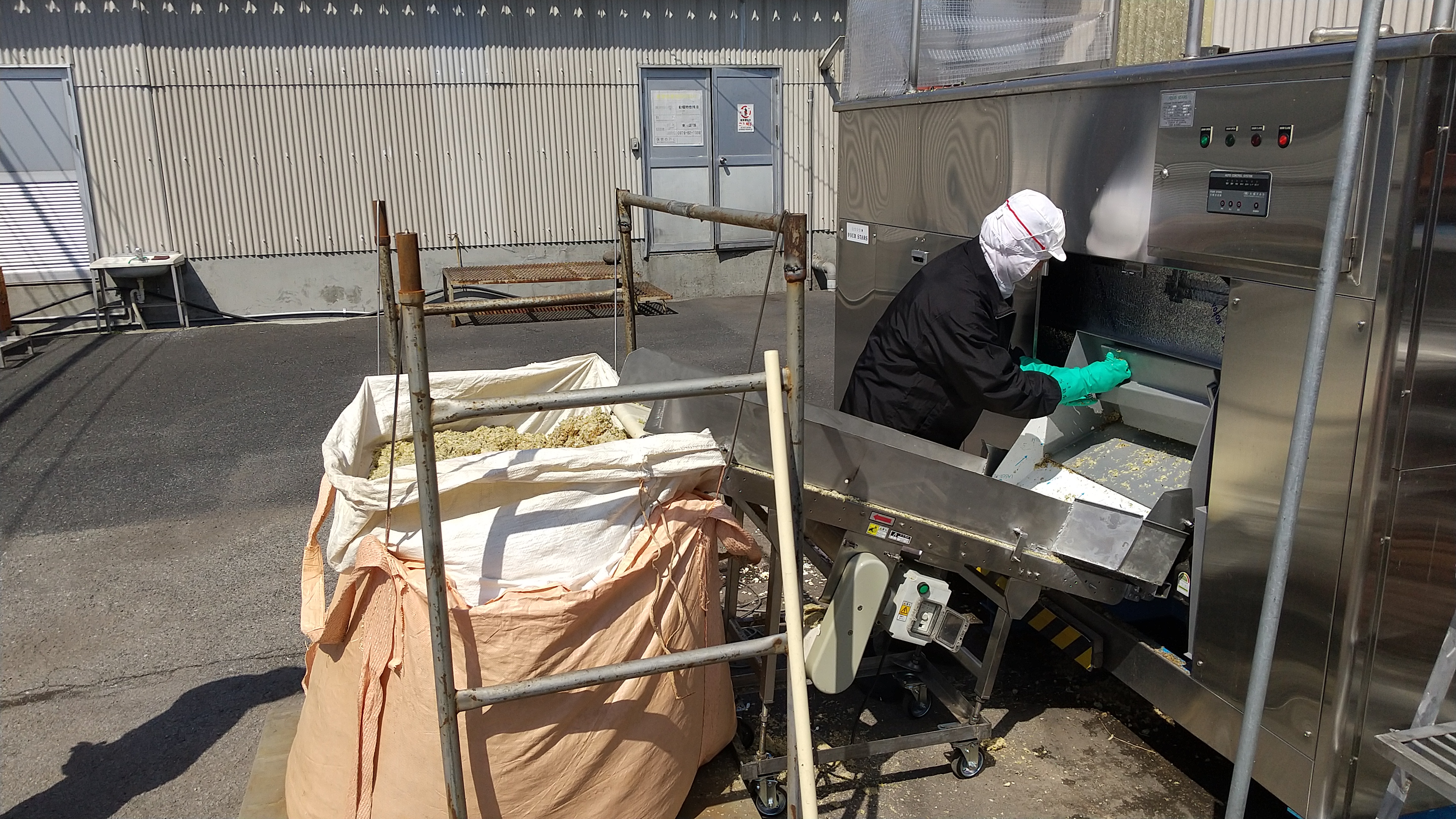 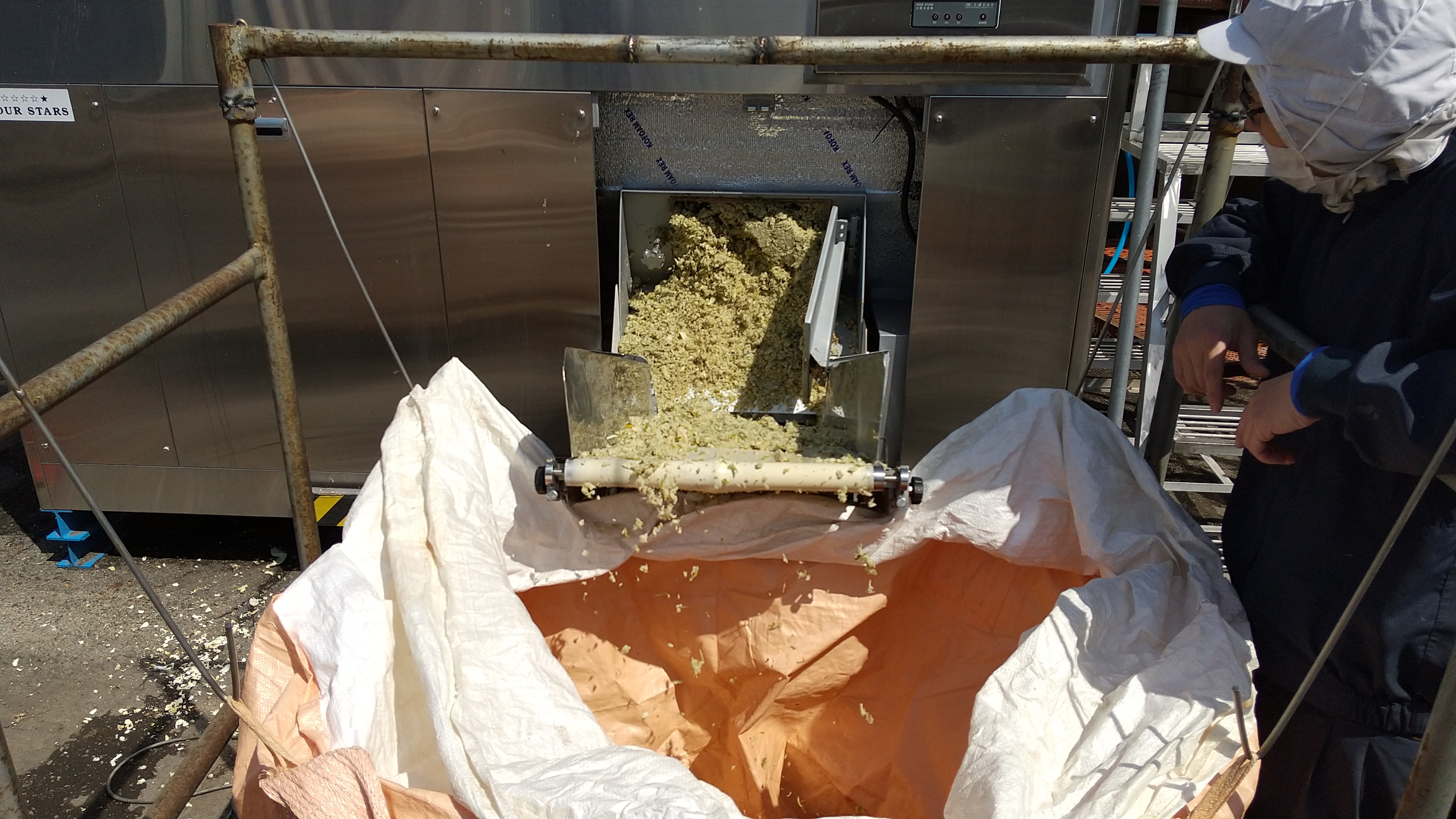 Since fiscal 2008, Nissui has been donating frozen food to Second Harvest Japan, a NPO that provides food to people in need. Second Harvest Japan plays the role of a food bank for people who cannot get enough food, providing them with foods that have no quality problems but cannot be sold due to being sub selling standards. Going forward, Nissui will continue these activities that lead to providing support to orphanages and mother and child living support facilities, while at the same time reducing the discarding of still-edible food. 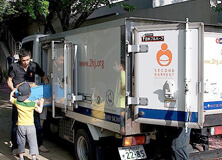 In fiscal 2018, the Nissui “KANKIRIBU” was launched under the slogan of “Do not let tinned food become food loss” (Sponsored by Nippon Suisan Kaisha, Ltd., with the cooperation of Food Salvage Inc.). While the “KANKIRIBU” in fiscal 2018 was open only to general consumers, starting from fiscal 2019, “KANKIRIBU” activities were expanded to the employees and held three times during the year. A total of 59 participants took part.

“KANKIRIBU” is an activity that addresses food loss and tinned food. It takes the form of an extracurricular activity in order to address the problem of food loss and waste in the most “fun” way as possible.
Tinned food with long best-before period can be used not only in everyday meals but also as effective emergency provisions. However, because they are stored for a long time, we need to be careful to prevent them from going to waste as a result of not noticing the expiration of their Best-before Periods.
Tinned seafood ranks high among foodstuffs that consumers are not sure what to do with at home (according to a survey by Food Salvage) and in fact, the Nissui Customer Service Center receives calls from customers on how to use tinned food products.
At the “KANKIRIBU”, chefs give lectures, while general applicants, the “extracurricular club members,” learn to cook using “Nissui’s tinned products and foodstuffs that tend to be difficult to deal with.” Participants experience cooking outside of the box and learn ideas on how to prevent food loss.
In fiscal 2018, “KANKIRIBU” events were held three times in Tokyo with a total of 64 participants. Unique dishes that depart from conventional recipes were presented at each event. Another unique feature was the large number of children participants. “KANKIRIBU” welcomes the participation of children, based on its belief that food loss and waste is a problem that needs to be addressed into the future. 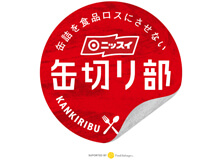 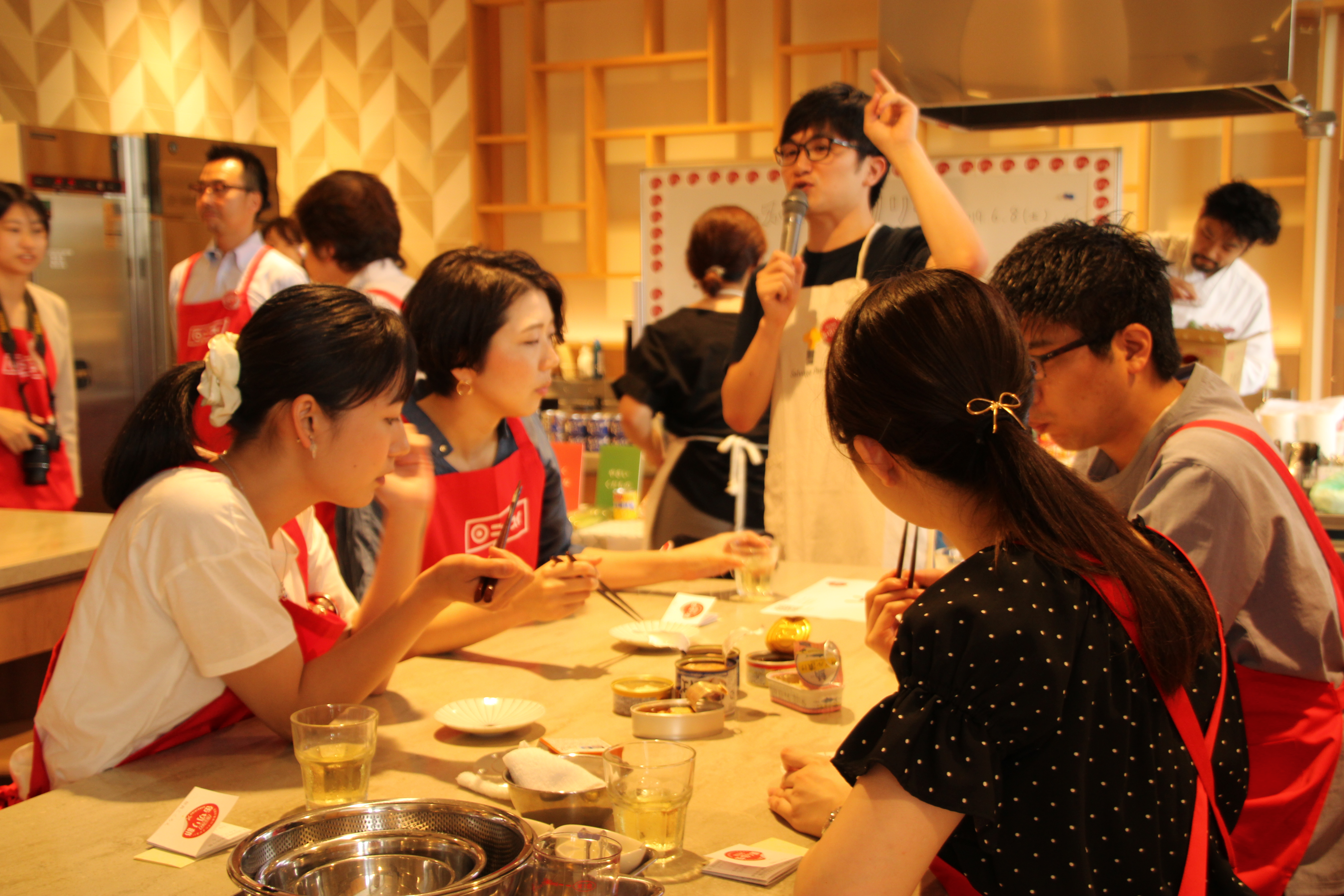 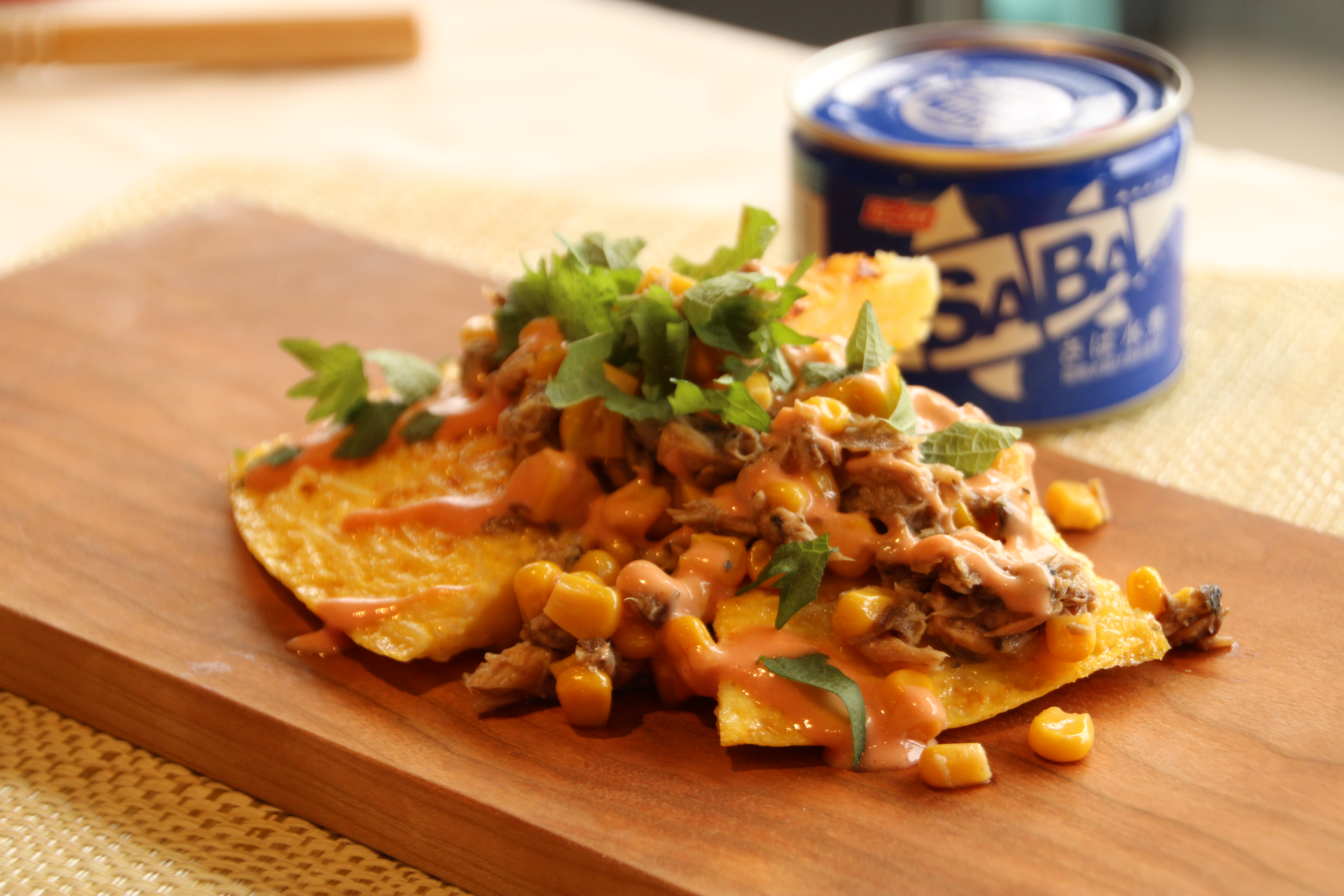 “Let’s eat everything on our plates!” Food Loss Reduction Campaign

Nissui is promoting a campaign to eat everything on our plates when ordering food in restaurants at office summer parties and end-of-the-year parties. The program aims to have as many employees as possible address the problem of food loss, which is one of the key issues to be addressed in CSR management, in a “fun” way. Nissui is also contributing to the support of people around the world suffering from hunger through this activity. Fiscal 2019 marked the third year for the program. Based on the number of participants of the two campaigns conducted in the past, we have set the amount of loss saved per person at 100 yen, and we have donated the amount equivalent to the “number of participants x 100 yen” to the United Nations’ WFP (Note). The donation will go towards the School Feeding Program to help impoverished children around the world.

In fiscal 2018, we expanded these activities to our group companies in Japan and awarded a crystal plaque autographed by President Matono to business locations that were especially proactive in these activities. The plaque is in the shape of a plate.
Additionally, “MY BOX” containers (personal food containers made of LIMEX) were distributed within the company to be used to take home left-overs. 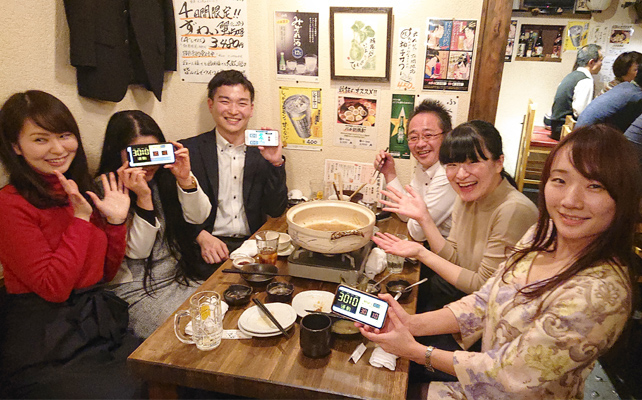 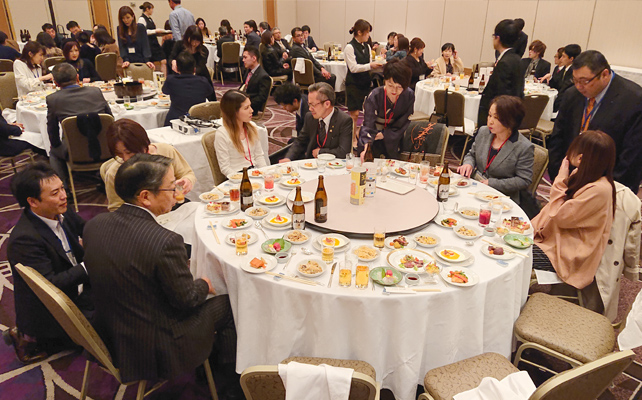 Food drives are activities conducted at schools and at the workplace to collect unused food that has been brought in from home and donate them to local welfare organizations and facilities and food banks. Food drives have long been popular in Europe and the US as initiatives to reduce food loss and have also been gaining recognition in Japan in recent years.
Nissui conducted a food drive at its head office from February 27 to March 4, 2020. 53 boxes of food, including unwanted gifts and excessive food purchases, were gathered and all donated to the NPO, Second Harvest Japan. The employees expressed opinions such as, “This was a good opportunity to become aware of food loss and the problem of poverty,” and “Next time, I would like to donate personally,” indicating that this food drive had provided an opportunity for the employees to think about food loss which was happening around them. 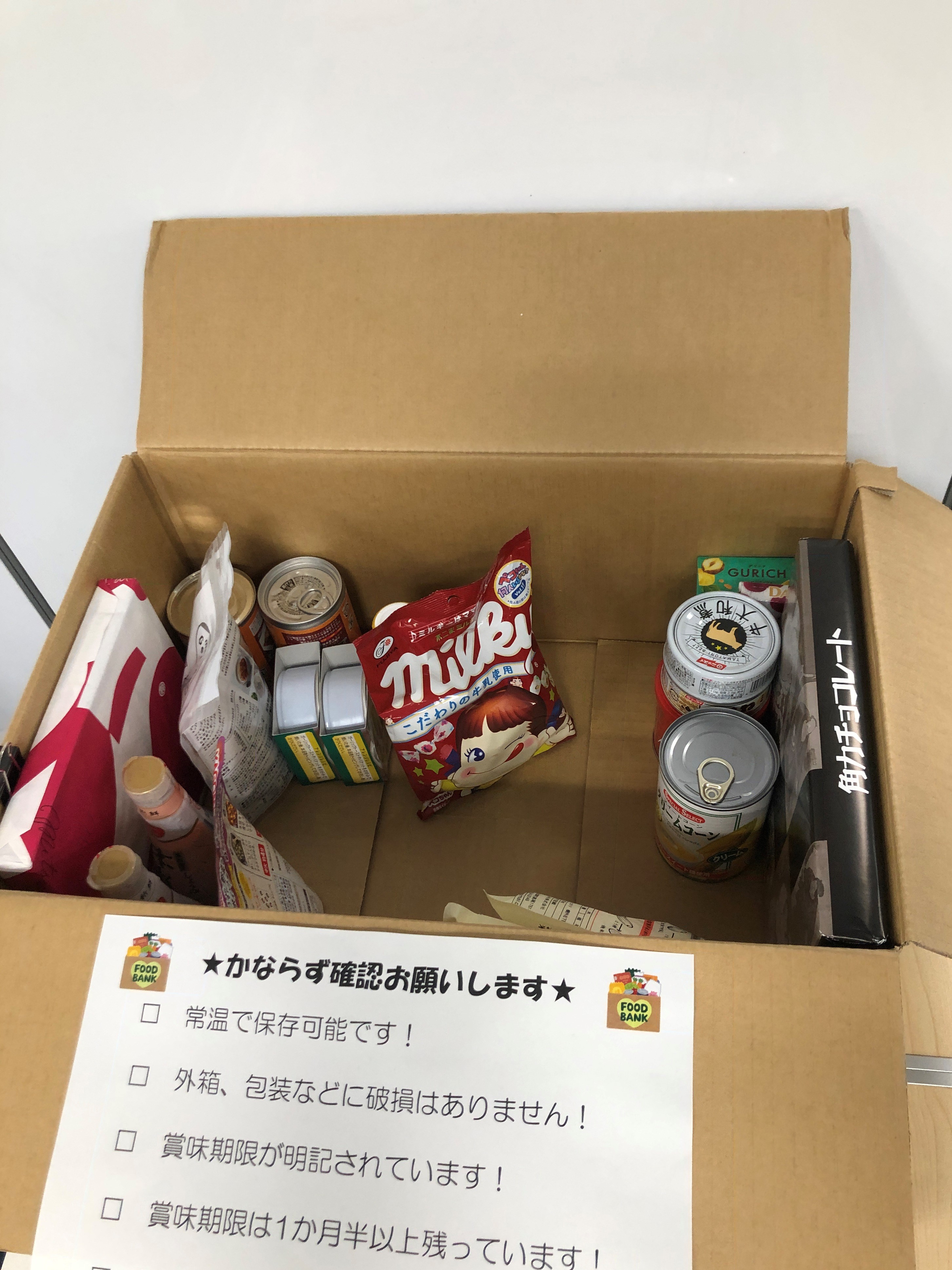 The Nissui Group company, Cité Marine S.A.S., operates retail outlets selling its products, in addition to manufacturing processed marine products in France. In 2019, the smartphone app, “Too Good To Go,” was implemented at the Cité Marine stores, in order to effectively utilize foods nearing their best-by dates. At the end of business hours at the end of the day, the employees at check-out put together a “Surprise Basket” containing foods with short periods until their best-by dates. Users registered on the app visit the store and purchase the basket. Items nearing the end of their best-by dates, which had previously been discarded, are being re-evaluated through this app, and being sold at a third of their original price. The office of “Too Good To Go” has announced that in the six countries (France, UK, Germany, Switzerland, Denmark, and Norway) where the app is used, the app contributed to reducing 1 million meals that would have ended up as food loss.