Plastic litter and microplastics that are 5 mm or smaller in the sea are raising major concerns as a problem that affects not only the marine environment but also the ecosystem itself, requiring the immediate attention of the international community as well as that of the nation. Plastics can be found in every body of water around the world and 8 million tons are still said to be flowing into the oceans each year and it is also a well-known fact that 80 percent of these plastics are land-based, i.e. originate from our daily lives, such as the plastic bottles that we drink from.

To address the problem of marine plastics, Nissui will commence the promotion of 3R activities (Reduce, Reuse and Recycle) of plastics and the study of the use of alternative materials. Furthermore, Nissui will share a common awareness as a Group and carry out activities to clean up areas surrounding its business locations and public areas such as beaches and rivers for the following purposes:

1. To contribute to the local community; and
2. To pick up litter and marine debris including plastics to prevent them from running off into the sea.

Nissui Group’s fundamental approach regarding the problems of marine plastics and the use of plastics was deliberated, and a policy was established.

Nissui Group Basic Policy Regarding the Problem of Plastics

We will work alongside other stakeholders to combat the problem of marine plastics as well as other global environmental issues, and to preservethe bountiful sea

1）Plastics outflowing to the ocean

Regarding plastic fishing equipment used in the fisheries and aquaculture businesses, we will prevent them from becoming microplastics and ghost gear (NOTE) by the use of alternative materials and assiduous management of the use of plastics

2）Waste from the production stage

3）Waste from the consumption stage

We will work to reduce the impact on the environment from our food containers and packaging, making use of plastic’s quality retention ability and other capabilities

4）Initiatives by every employee

Through participation in cleanup campaigns, employees will work to reduce plastic waste in the community, river, and sea, and preserve the marine environment

(NOTE)Ghost gear: Fishing equipment that is lost or abandoned and remains in the marine environment

In February 2019,  the Marine Environment and Plastics Subcommittee was established, due to concerns over the impact of marine plastics on Nissui’s businesses, against the backdrop of social issues including the progression of serious marine pollution on a global scale caused by marine plastics among others, the concerns for the impact of marine plastics on the marine ecosystem and human beings, and the failure of recycling to function as a result of the reduction in the effective utilization of waste plastic. The two working groups (the Marine Environment WG and the Plastics WG) are, respectively, promoting activities, with Executive Officers appointed as Chairmen of the working groups and General Managers and section chiefs of relevant divisions appointed as members.

The Marine Environment Working Group is promoting zero emission of plastics in the marine environment.

Twice a year since 2010 the Nissui Group has been carrying out the “Cleanup Campaign,” activities to clean up the areas surrounding the Group’s domestic business locations around the country. In the advance information given prior to the cleanup , the participants learn that litter could potentially flow into the rivers and reach the ocean and that this activity is not merely a cleanup exercise but a way to prevent litter from flowing into the ocean, and are made aware of the relationship between this activity and Nissui’s business.
In the 18th Cleanup Campaign held during May and June 2019, 1,659 employees of the 111 domestic offices participated and picked up a total of 2,831 kg of rubbish. 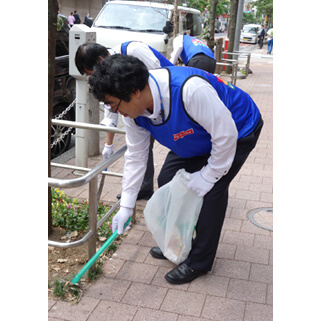 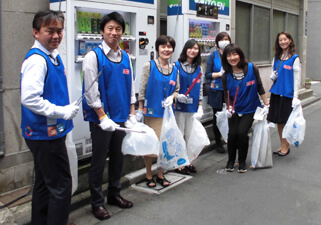 Cleanup Activities in outside Japan

Nissui Group companies in outside Japan are also carrying out activities to clean up the areas surrounding its business locations. 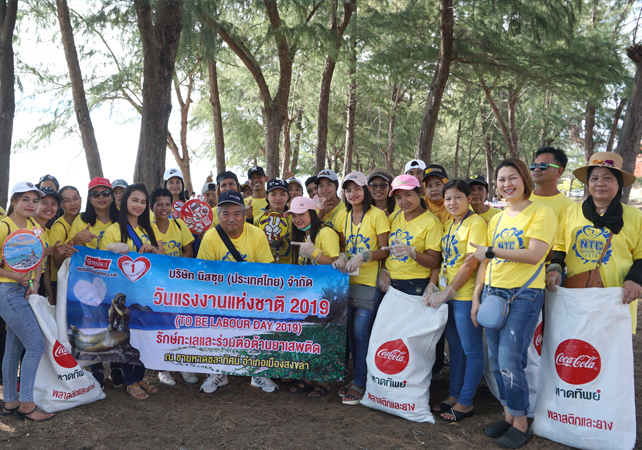 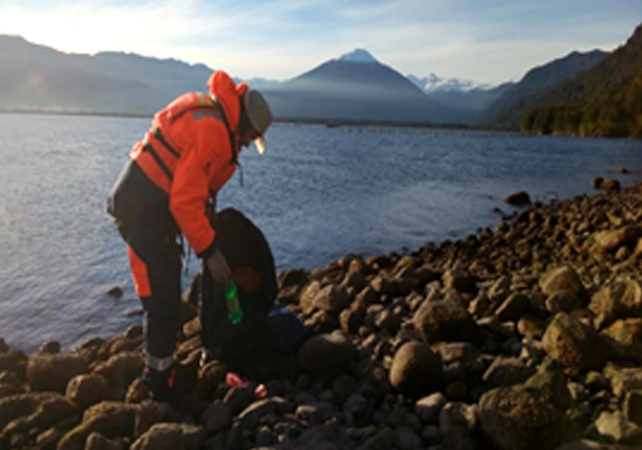 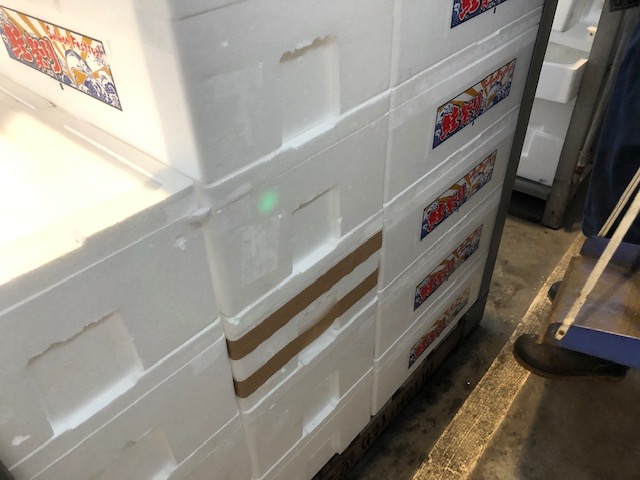 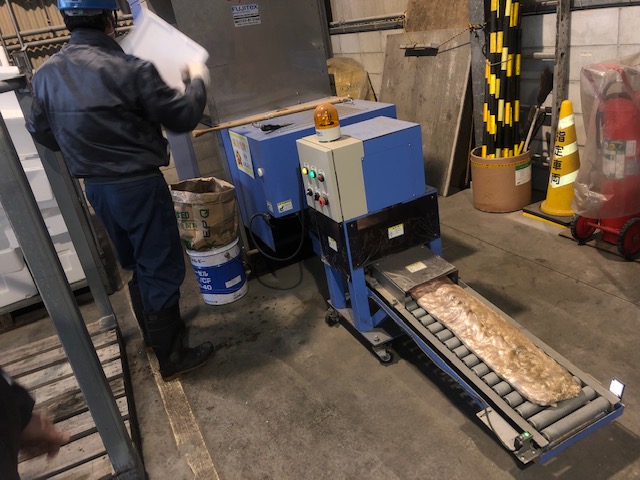 Since 2017, Nissui, with the cooperation of the NPO, The Arakawa Clean-aid Forum , has been learning about the river environment, experiencing biodiversity and conducting cleanup activities to pick up litter. In fiscal 2019, in addition to the seminar for new employees to get to experience the importance of the sea which started in fiscal 2018, a seminar was held in May at Arakawa for the CSR Promotion Team Members of the head office who were responsible for promoting CSR activities (One member has been assigned to each department). Additionally, in September a program for employees and family members was carried out with 20 participants. In the classroom, the participants listened to a lecture on the social issues surrounding the problem of marine plastics based on the latest data and came face-to-face with the problem in the subsequent fieldwork conducted on the riverbed. The participants were astounded at the volume of rubbish and the mounds of plastic wastein the river and thought about the tasks that could be done by each person close to home in order to solve this problem. 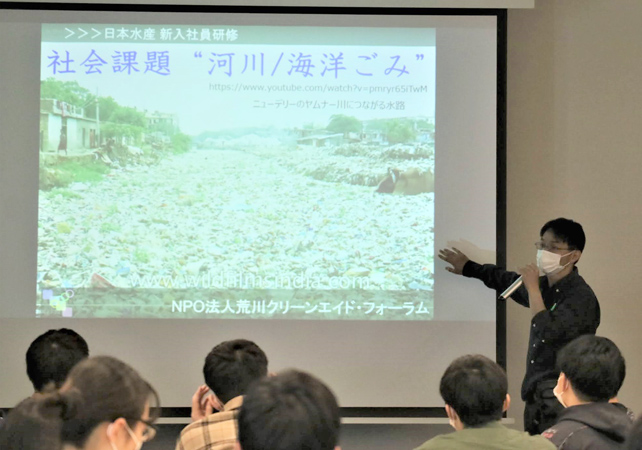 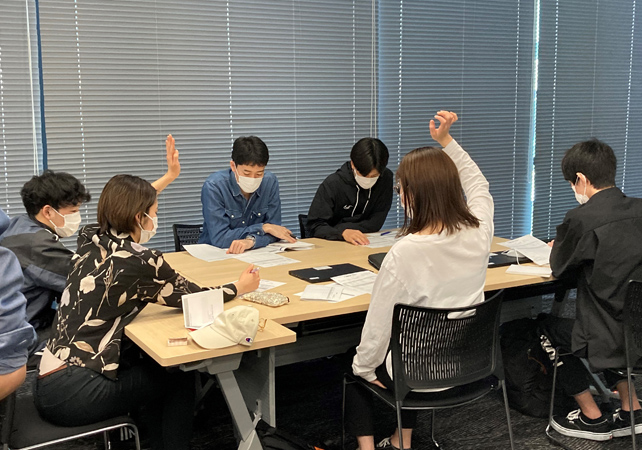 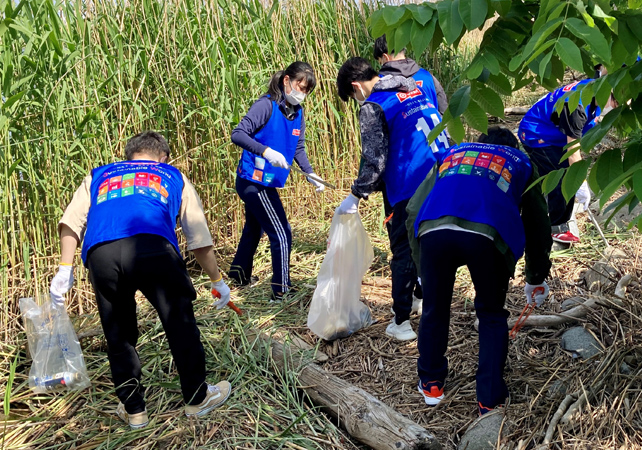 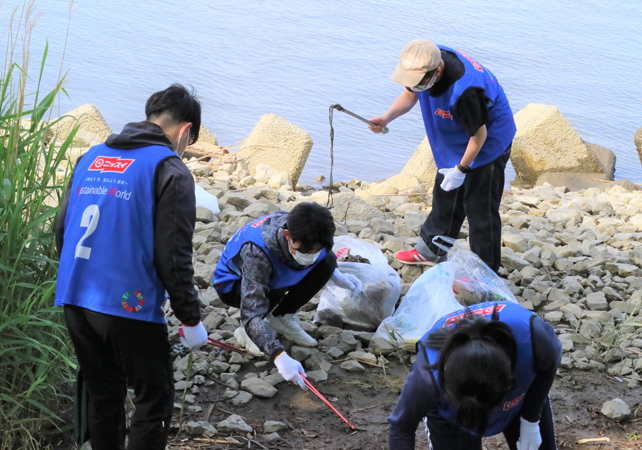 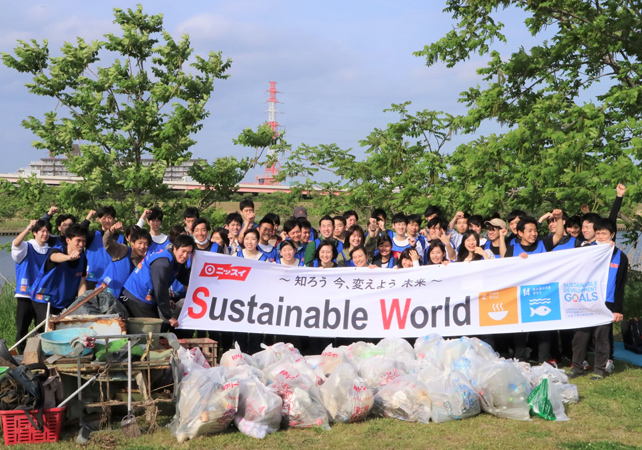 In 2018, Nissui, as part of its efforts to combat food loss, made and distributed My Boxes (personal food containers made of LIMEX) to its employees. LIMEX is a new material made mainly of lime stone to replace paper and plastics. My Boxes can be used as a doggy bag to take home food left over from dining out or as an alternative to the disposable plastic containers used by food stalls and other venues. The message, “IMA JIBUNGA DEKIRUKOTO (What I can do now)” is printed on the top of the box, while the bottom shows the related SDGs and the message, “We will act responsibly and finish our food, considering there are people who do not have enough to eat ” and “This is a challenge that will lead to bountiful seas.” 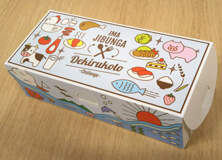 Support of a Venture Addressing the Problem of Plastics Flowing into the Ocean (Pirika Inc.)

Marine litter including plastics is said to originate from the land, mainly from the cities but its discharge routes are not known. From fiscal 2018, Nissui has been a supporter of Pirika Inc., which is committed to the Albatross Project that aims to investigate the facts surrounding plastics flowing into the ocean and has commenced concrete approaches in dealing with the problems of the marine environment and the problem of plastics flowing into the ocean, which are directly connected to Nissui’s business.

Development of research methods : Develop an effective method of research on the flow of plastics into the ocean.

Clarification of the flow mechanism : Study the mechanism of plastics flowing into the ocean (flow routes and flow items) and narrow down the problem.

Study and implementation of measures : Study, prioritize and implement measures to combat the problem of plastics flowing into the ocean. 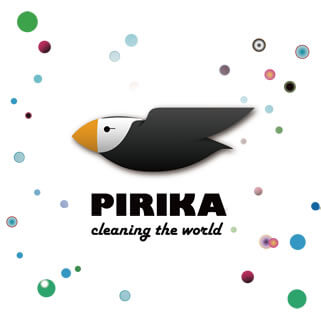 Campaign to Cut Down on the Use of Plastic Bags “NTC say no plastic bag” (Nissui (Thailand) Co., Ltd.)

Nissui (Thailand) Co., Ltd. (NTC), the Nissui Group company, is engaged in the processing of fish including salmon/trout in Hatyai, Thailand. Nissui (Thailand) started the campaign “NTC say no plastic bag” (Say no to using plastic bags) from December 2019. This initiative aims to share knowledge on environmental problems especially those stemming from the use of plastic bags with employees and business partners and to actually cut back on their use. At the plants, the employees and vendors are being encouraged to use bags made out of natural materials rather than plastic bags. The plastic bags used in the cleaning of employee uniforms have also been switched to cloth bags. Additionally, a contest was held for handmade cloth reusable shopping bags using recycled materials. 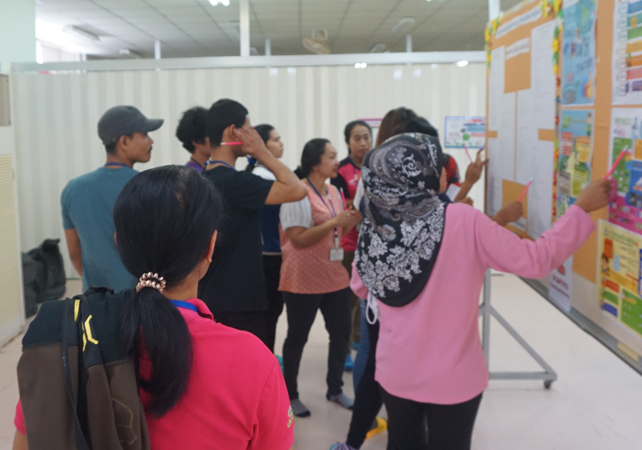 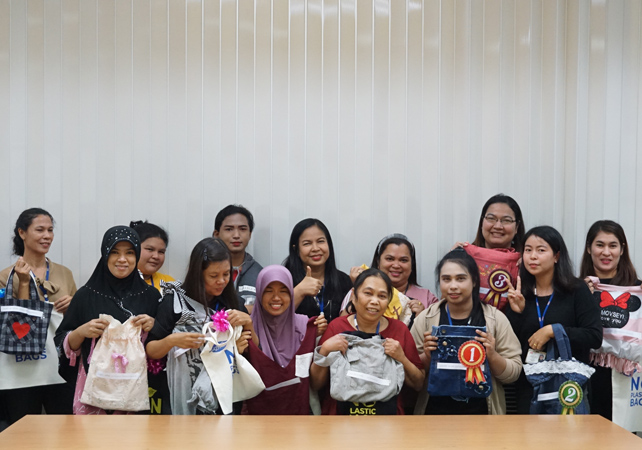 Sealord Group, Ltd., the Nissui Group company, is a New Zealand marine products company. Sealord Group had previously used plastic (polystyrene) cups internally for the employees’ coffee cups and disposed of them in landfills after use. In 2019, the company made a decision to abolish them in stages and began the switch to cups made out of environmentally-friendly materials. The EcoCups made by Ecoware NZ (Note) were adopted. The EcoCups are made out of plants rather than petroleum and may be recycled by commercial composting after use. In adopting these cups, an environment that will enable recycling by composting was prepared by installing several dedicated collection bins around the company’s premises. One example of these efforts is the switch from landfill disposal to recycling by commercial composting of all cups, i.e. the approximately 8,000 cups currently being used at the Nelson siteof Sealord Group. In 2019, the volume of plastic reduction as a result of these efforts, together with the other business locations, reached approximately 1ton/year. 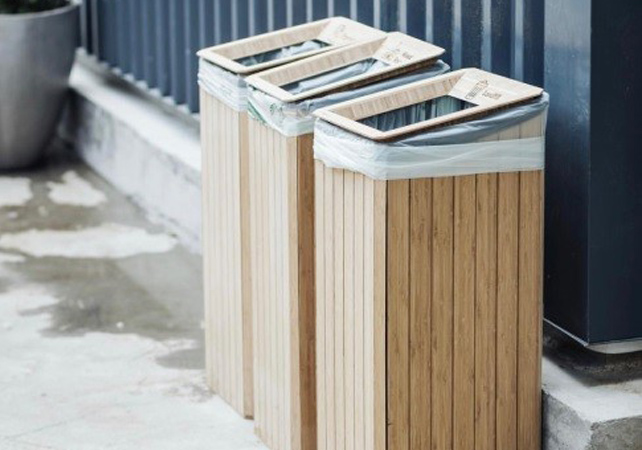 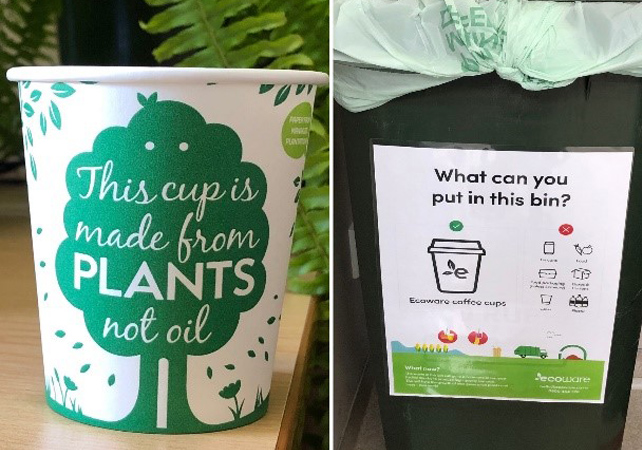