Social issues cannot be solved through the efforts of the Nissui Group alone. Recognizing the importance of collaboration with the various companies, NGOs/NPOs and the government agencies of each country, we have been in communication with various related organizations.

As one of the signatories to the SeaBOS (Note) initiative, along with other leading companies in the global seafood industry, Nissui is working to resolve obstacles to a sustainable marine business. At the Tokyo Sustainable Seafood Symposium held in October 2017, Nissui expressed the thinking behind SeaBOS to preserve and make sustainable use of the marine environment and resources. We also declared our commitment to the SeaBOS initiative as part of our CSR activities.

At the fourth SeaBOS Dialogue held in Phuket, Thailand in September 2019, progress reports on the eradication of IUU (Illegal, Unreported and Unregulated) fishing and modern-day slavery were given and the impact of climate change on the marine environment was discussed. Discussions were also held on the problem of marine plastics, and in addition to the participation of SeaBOS in the GGGI (Global Ghost Gear Initiative), the formulation of strategies through the establishment of a new and separate taskforce for the reduction of Ocean Plastics was resolved. Additionally, in November, a panel discussion on SeaBOS was held at the Tokyo Sustainable Seafood Symposium. Nissui, along with Martin Exel, the Management Director of SeaBOS and Maruha Nichiro Corporation took the podium and reported on the company’s commitment toward the survey of procured marine resources sustainability and the problem of marine plastics. 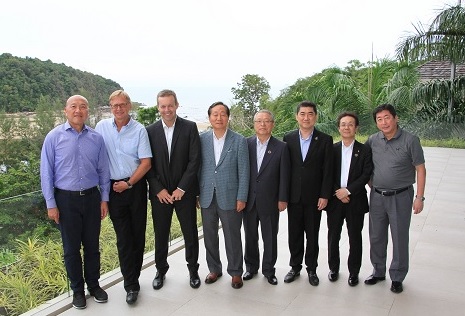 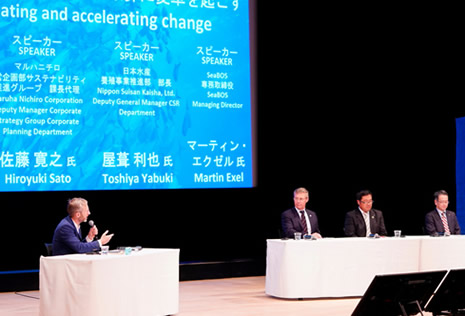 (Note) SeaBOS:
Acronym for Seafood Business for Ocean Stewardship. Seafood companies from around the world including Japan, Norway, Thailand, US and South Korea are members. From Japan the three companies - Nippon Suisan Kaisha, Ltd., Maruha Nichiro Corporation and Kyokuyo Co. Ltd. – participate (As of March 2020). The Stockholm Resilience Centre of Sweden’s Stockholm University cooperates by providing support for activities from the scientific aspect.

Featured dialogue between Akiyo Matono, the president &CEO of Nissui with Martin Exel, the new managing director of SeaBOS

One of the major features of SeaBOS is the collaboration by scientists and the major companies of the seafood industry to work toward sustainability with a scientific basis. For example, the companies which form the membership of SeaBOS are selected based on the traditional concept of “Keystone species” in ecological research.“Keystone species” are thought to have a major effect on the ecosystem and serve as the key of each species (The word “keystone” denotes the central stone at the summit of an arch). Based on this concept, SeaBOS believes that the major global seafood companies may become the “Keystone actors” which will have an immense effect on the marine ecosystem and that if these companies assumed leadership in sustainability initiatives, it would have a chain effect on the seafood industry as a whole, and as a result, it would largely improve the management of marine resources and the marine ecosystem. 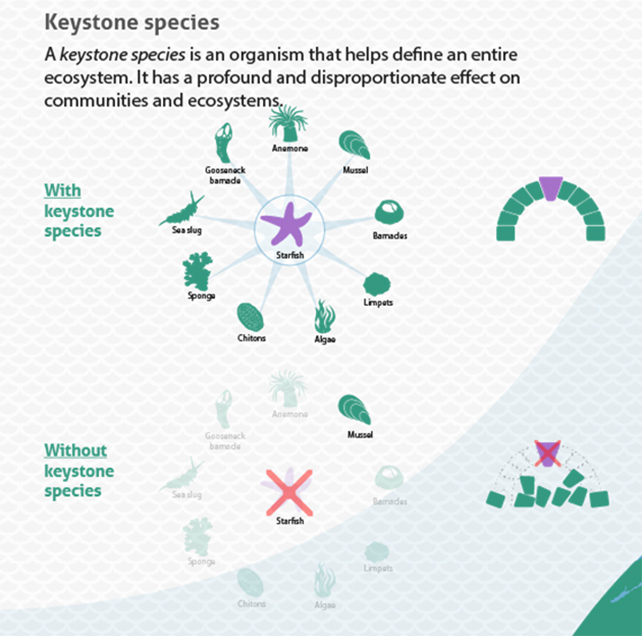 SeaBOS has several task forces dedicated, for example, to eliminating IUU fishing and the problem of marine plastics, and engages in various initiatives for the sustainability of marine resources. 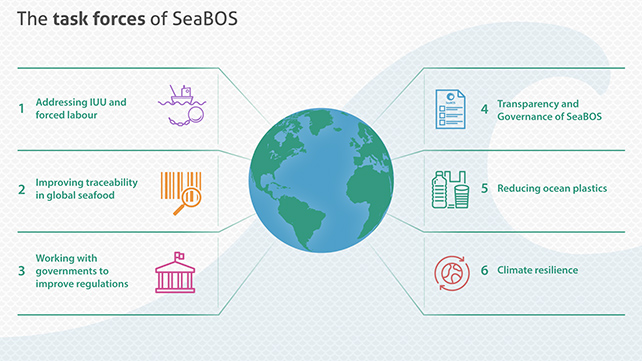 Nissui conducts stakeholder dialogues in order to utilize the opinions of various stakeholders in its management and CSR activities.
On August 1, 2018, the fourth stakeholder dialogue was held.
In this stakeholder dialogue, experts – Yoshioki Oozeki, Ph.D, Senior Advisor, Japan Fisheries Research and Education Agency, and Aiko Yamauchi, Leader, Oceans and Seafood Group, Conservation Division, The World Wide Fund for Nature, Japan (WWF-Japan) – were invited to exchange opinions on the sustainable use of marine resources and CSR procurement. 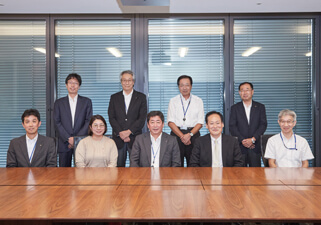 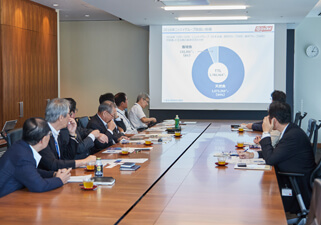 The stakeholder dialogues we have conducted so far
Click here

Seafood certification programs such as MSC determine their criteria on the basis of the “Code of Conduct for Responsible Fisheries” and the “Guidelines for the Ecolabelling of Fish and Fishery Products from Marine Capture Fisheries” of the Food and Agriculture Organization of the United Nations (FAO) but with the widespread acceptance of the concept of sustainable seafood, the number of certification programs has multiplied and it has become necessary to ascertain the value of such certifications. Consequently, the GSSI (Global Sustainable Seafood Initiative), a third-party benchmarking agency to verify that certification programs meet FAO guidelines, was established. GSSI is an international partnership that verifies programs assessing the sustainability of marine products.
In April 2017, Nissui became the first Japanese company to become a Funding Partner which promotes global resource sustainability. As of March 2020, six companies of the Nissui Group are registered as Funding Partners. As a company engaged in the marine products business, Nissui Group will address the issue of sustainable use of marine resources, as well as contribute to the realization of responsible fishery. 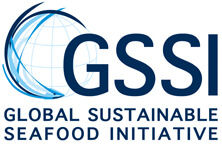