The Nissui Group is working to enforce compliance in a thoroughgoing manner including complying with laws and regulations in/outside Japan as well as various internal rules pursuant to the Code of Ethics, in order to meet the expectations of all of its stakeholders such as customers, employees, business partners and shareholders and fulfill its corporate responsibility. Having established the "Ethics Subcommittee" under the Risk Management Committee, we are endeavoring to implement measures for the early detection, rectification and recurrence prevention of compliance issues and striving to raise employees' awareness of compliance.  We are also engaged in initiatives to develop and enhance the compliance structure of the Nissui Group as a whole, not just Nippon Suisan Kaisha, Ltd. (Nissui). 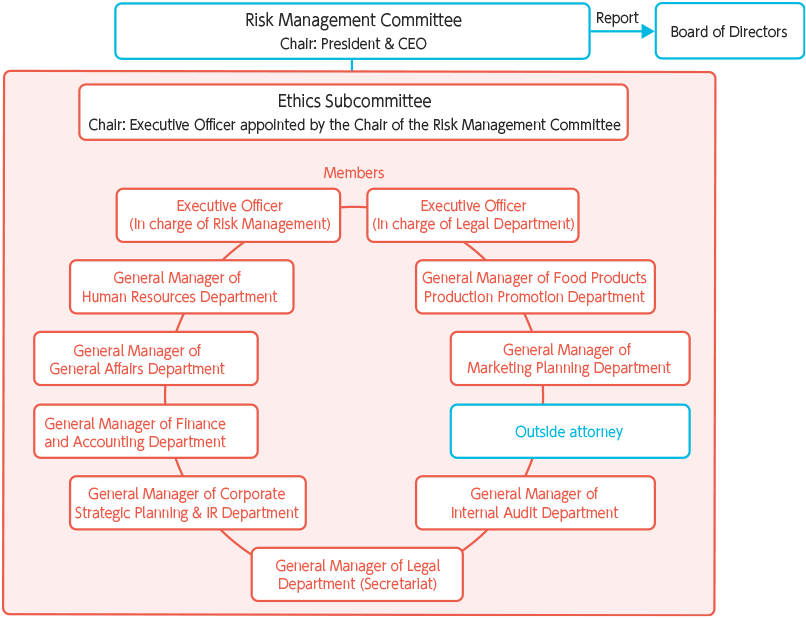 We have a whistleblowing system in place, enabling employees of Nissui and its Group companies in Japan to directly notify the Ethics Subcommittee of questionable acts in terms of compliance, etc. We have established points of contact for whistleblowing both internally (i.e., the Legal Department serving as the secretariat of the Ethics Subcommittee) and externally (i.e., outside specialist), and have a mechanism whereby the Audit & Supervisory Board Members are also contacted simultaneously. Whistleblowing notices are given directly by such means as telephone, Web and email, and may be made anonymously.
In the event that a whistleblowing notice has been given, the Ethics Subcommittee conducts an investigation by selecting a person responsible for the investigation while giving consideration to ensure that the whistleblower will not be put at a disadvantage, and examines the findings of the investigation and improvement measures within the Subcommittee.
When conducting an investigation, there is a clear policy "not to look for the whistleblower," and the protection of confidentiality and the prohibition of disadvantageous treatment of the whistleblower are stringently enforced. Of note, even if a notice given to the external point of contact for whistleblowing was not anonymous, there is a system in place to report it to Nissui anonymously upon the whistleblower's request. For harassment incidents, multiple points of contact have been established, and such incidents are handled by the Harassment Desk (Human Resources Department). The Harassment Desk also collaborates in conducting investigations into notices given via the points of contact for whistleblowing.
In regards to the minutes of the Ethics Subcommittee including the nature of and response to notices, we have a system in place for the minutes to be reported to and made available for perusal by Directors, Audit & Supervisory Board Members and Executive Officers. Also, the officer in charge makes a report regarding important whistleblowing-related matters to the Board of Directors.
The aforementioned overview of the whistleblower system is stated in Nissui's whistleblowing rules. Of note, in fiscal 2021, the rules were reviewed to prepare for the enforcement of the revised Whistleblower Protection Act.
The operation of the whistleblowing system is described not only on Nissui's internal portal site but also in the "Nissui Group Ethics Card" distributed to Group companies in Japan, to make it widely known among employees.. 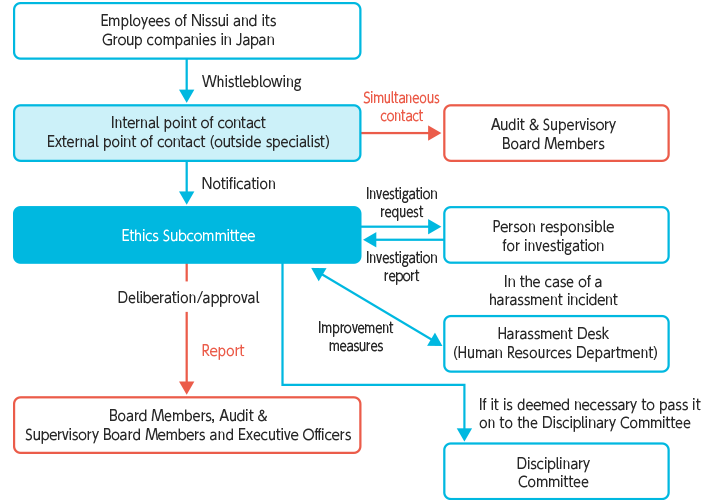 If a single case involves multiple categories, such as harassment and labor problems, it is counted based on the matter deemed most serious as a problem.

Once every year, we conduct a compliance questionnaire survey covering employees for the purpose of getting a grasp of company-wide compliance trends, identifying compliance problems in the bud in each organization and making use of the findings to improve the workplace environment in the early stages. The questionnaire survey conducted in October 2021 covered 2,505 employees (including temporary employees (Note)) of Nippon Suisan Kaisha, Ltd. (Nissui), of whom 2,183 employees responded, resulting in a response rate of 87%. For foreign employees, questionnaires translated into five languages (i.e., English, Spanish, Portuguese, Chinese, and Vietnamese) were distributed, to which 273 out of 317 foreigners on Nissui's payroll responded, resulting in a response rate of 86%.

Response  status of the Questionnaire

Once every year, we identify transactions that may put Nissui in a particularly dominant position and conduct a compliance questionnaire survey covering business partners involved in such transactions for the purpose of getting a grasp of whether or not Nissui has engaged in acts of abuse/misconduct (such as violations of the Antimonopoly Act/Subcontract Act) by exploiting its dominant position against its business partners.
The questionnaire survey conducted in November 2021 covered 176 companies, of which 143 companies responded, resulting in a response rate of 81%.

Response  status of the Questionnaire

Initiatives to Raise Awareness of Compliance 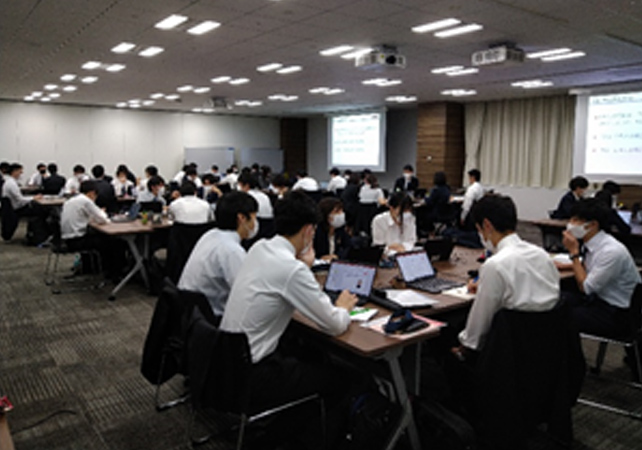 Sharing the Code of Ethics

The “Code of Ethics” is posted on Nissui’s internal portal site. The Code of Ethics is shared with employees to raise their awareness of compliance.

Initiatives to Develop and Enhance Compliance Framework in the Entire Group

In order to reduce compliance risks in the Nissui Group as a whole, Group companies are promoting the development and enhancement of their respective compliance frameworks.
The status of compliance activities at each Group company is periodically reviewed through the Risk Management Committee. On top of this, since fiscal 2020, a workshop has been held on a company-by-company basis to encourage Group companies to build a compliance framework of a higher standard suited to the nature of their respective businesses, management scale, etc. Opinions are exchanged on such matters as issues in responding to notices, response flow and future activity plans with the participation of the respective chairpersons of the ethics committees of Group companies, as well as the respective persons responsible for and persons in charge of the secretariats of such ethics committees. This workshop is conducted at about five companies per fiscal year and is scheduled to be completed at all Group companies within the scope of the workshop by fiscal 2024.
Furthermore, in fiscal 2021, we provided support to Group companies to make them develop a framework in compliance with the revised Whistleblower Protection Act, such as explaining the outline of the revision of the Act through workshops and distributing a sample of rules.