Global seafood consumption has been increasing and demand is expected to continue growing in the future. In order to deliver safe, secure and delicious fish to its customers, the Nissui Group has been focusing on its aquaculture business both in Japan and overseas. Overseas, the Group is engaged in the aquaculture of salmon and trout, while in Japan the Group operates the aquaculture businesses of yellowtail, tuna, coho salmon, mackerel and blowfish, among others.
As a manufacturer of food, the Nissui Group insists on “good-tasting food,” and using this as a starting point, it has been involved in various research and technological development in every stage of the process of farming fish from seedlings, fish feed, cultivation, processing and distribution.
Furthermore, by having staff responsible for the different types of products, such as those intended for volume retailers, ready-to-eat meals and restaurants, provide feedback on customer needs of their respective fields to the relevant divisions, the Group has been able to develop technology that meets these demands. 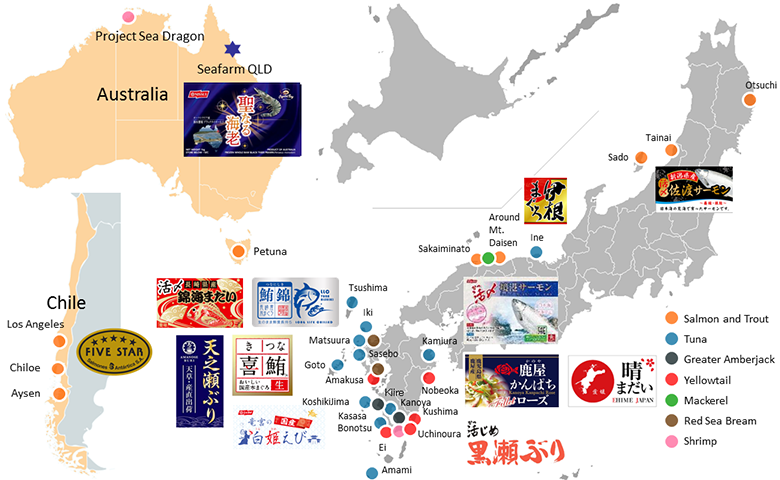 Utilization of AI and IoT Technology

In collaboration with NEC, which possesses cutting-edge artificial intelligence and Internet of Things technology, Nissui has developed an automated farmed fish measuring solution. Simply by uploading images of the farmed fish as they swim about their tank, the technology is able to calculate the fish’s size and lengths and report that information. In aquaculture, there is a need for such solutions to constantly manage the growth status of the fish. This solution alleviates the risk of stress or disease that comes from people physically handling fish. It also reduces labor and inconvenience, and improves measurement accuracy, thereby boosting productivity. The Nissui Group will continue to deliver safe, secure and delicious farmed fish by expanding the scope of AI and IoT utilization.

In order to use marine resources in a sustainable manner, the Nissui Group works to advance its aquaculture technologies. Within Japan we are opening up new possibilities, from farming yellowtail and coho salmon using our independent technologies; to producing entirely farmed tuna; researching the aquaculture of vannamei (white) shrimps at domestic on-land sites; and creating the technology needed to fully farm common octopuses, an endeavor previously thought too challenging. Nissui is also making progress with the development of aquaculture technology that prevents water pollution and minimizes the effect on marine ecosystems, such as solid feed mix EP pellets that are not accidentally dispersed out into sea and the automatic feeding Aqualingual®.

In 2011, the Nissui Group commenced basic research into the on-land farming of vannamei (white) shrimp in Japan, and from 2016 began studies for its commercialization (feasibility studies). The “closed biofloc method” was adopted as the farming method at the on-land site. This minimizes the amount of water used and uses aggregates of organic matter (bioflocs) to purify the water, thus reducing the environmental impact compared to conventional farming methods. While commercial use of this method is becoming widespread in Europe and Southeast Asia, this will be the first time it is used in Japan. Previously, most of the shrimp marketed in Japan had been frozen imported shrimp but with this method, the Nissui Group is now able to deliver farmed shrimp, which is fresh and may be consumed raw and which are safe and secure from not having to use drugs. Partial shipment commenced in 2017 and from September 2018, a limited number of shrimp have been marketed nationwide as “Shirahime Ebi (“Snow White Shrimp”)” for professional use.

Since March 2018, the Nissui Group has been shipping fully farmed bluefin tuna produced in Japan with the "Kitsuna Gold Label®" brand name, in which its unique innovative touches have been applied to each process from feeding to landing and packaging. In bluefin tuna fingerling production, it is common to feed hatched larvae of other fish such as parrot fish and Japanese whiting (i.e., hatched larvae as feed) to larval bluefin tuna in the post-hatching period. Thanks to the research conducted by the Nissui Oita Marine Biological Technology Center of the Central Research Laboratory, the Nissui Group has succeeded in developing the technology to replace such feed with its unique formula feed and eliminate the need for hatched larvae as feed, realizing higher productivity. Bluefin tuna bearing the "Kitsuna Gold Label®" is shipped to customers using refrigerated delivery after being processed at the site where it has been landed. Furthermore, the addition of the Group’s unique innovative touches to each process including feeding methods, harvesting and processing, and packaging has enabled us to offer bluefin tuna with higher levels of vitamin E than regular tuna, with nearly 20% more of the umami ingredient, inosin, and with better color.

Kaneko Sangyo Co., Ltd., a Nissui Group Company, is engaged in initiatives for "local processing," in which farmed bluefin tuna is processed/packaged while being kept ocean-fresh, to be shipped using refrigerated delivery. Its processed bluefin tuna product has been made available for sale as "Tuna Nishiki®" since May 2018. After being landed, "Tuna Nishiki®" bluefin tuna is transported to a processing plant in Karatsu, where it is packaged individually with a special film and shipped, by stringently applying Kaneko Sangyo's patent-pending proprietary temperature control technology.

The three counterparties of Nissui, Yumigahama Suisan Co., Ltd., of the Nissui Group and Hitachi Zosen Corporation reached an agreement on February 15, 2019 to commence the joint development of a large-scale land-based recirculation aquaculture system for chub mackerel, which will be the first of its kind in Japan. This joint development will combine the knowledge of chub mackerel aquaculture held by Nissui and Yumigahama Suisan with the water treatment technology of Hitachi Zosen, and will be based at the testing facilities, which is scheduled to be built in Yonago City, Tottori. Construction commenced in June 2019 and the facility was in operation in May 2020. Commercialization of the project is scheduled from April 2023. 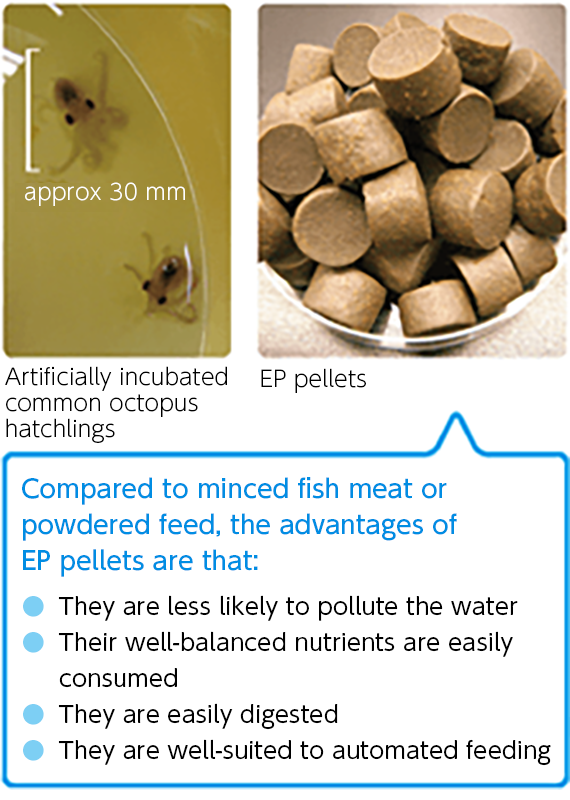 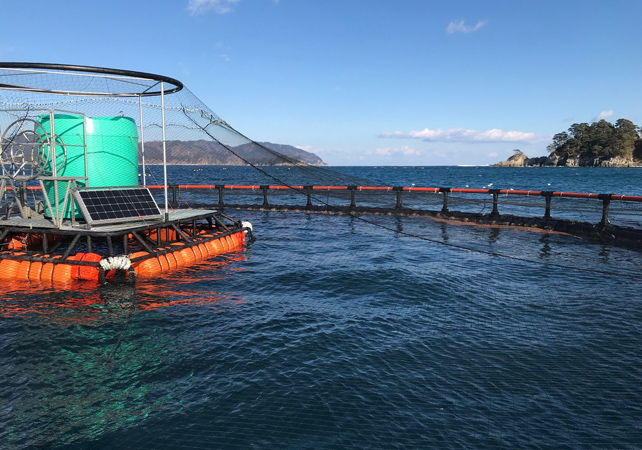 Participation in the Salmon/Trout Aquaculture Commercialization Test in Iwate Prefecture

In January 2019, the five parties - Nissui, the Nissui Group company, Yumigahama Suisan Co., Ltd., “Shin -Otsuchi Gyogyou Kumiai (Shin-Otsuchi Fisheries Cooperative)” (Otsuchi-cho, Kamihei-gun) (Note), “Otsuchi Fukko-sha Kyodo Kumiai”, and the Japanese Institute of Fisheries Infrastructure and Communities of Tokyo - concluded an agreement to collaborate in carrying out salmon/trout aquaculture tests, from the standpoint of creating new businesses in Otsuchi-cho.
Nissui and Yumigahama Suisan Co., Ltd. will participate in the trial aquaculture to be carried out by “Shin-Otsuchi Gyogyou Kumiai” aiming to commercialize large-scale, sea-surface cultivation of salmon/trout. This trial aquaculture will be conducted mainly by “Shin-Otsuchi Gyogyou Kumiai” and will be a collaboration with Otsuchi-cho, the local business operators, and the comprehensive think tank for the promotion of fishing villages. To this end, we will offer the Nissui Group’s knowledge and knowhow on salmon/tour aquaculture and aim to promote the coastal fishery and the fishing villages of Iwate Prefecture and to create new business opportunities. In addition, Yumigahama Suisan Co., Ltd. will establish a local office in Otsuchi-cho, join “Shin-Otsuchi Gyogyou Kumiai” and participate in the trial aquaculture.

(Note) "Shin-Otsuchi Gyogyou Kumiai (Shin-Otsuchi Fisheries Cooperative) ": Oversees the area comprising Otsuchi Bay in the southern part of Otsuchi-cho and Funakoshi Bay in the northern part. Both areas are excellent fishing grounds characterized by the ria coastline, which is unique to the Sanriku region, where the Black Tide and the Oyashio Current (the Kuril Current) intersect, bringing with them bountiful marine resources. Seaweed such as wakame seaweed and kelp, shellfish such as scallops and oysters, and fish such as salmon, mackerel, and middle-sized Japanese amberjack are caught. Going forward it will work to stabilize fish hauls, expand each business, and engage in initiatives to promote aquaculture.

New facilities are slated for completion in the middle of 2021. Once completed, there are plans to increase the harvest volume from the current 1,000 tons to 2,700 tons in 2022. The Nissui Group has operated offshore aquaculture businesses for salmon and trout in Chile and Japan, but by taking on this new method of aquaculture, namely land-based RAS farming, via this capital participation, we aim to strengthen our ability to procure sustainable marine products.

(Note): Land-based flow-through aquaculture system: This is a system by which water used for rearing is taken in from the sea or rivers and used as rearing water in tanks. (The used water is drained out as wastewater.)