Nissui has been an official sponsor of the “All Blacks,” the national rugby team of New Zealand, through the New Zealand Rugby Union (NZRU) since 1988 and has co-sponsored the New Zealand Universities Rugby Foot Ball Council since 2003.

Nissui has a long, close relationship with New Zealand; we have operated a trawl fishery off the New Zealand coast and manufactured canned foods made from mutton produced in New Zealand. Moreover, Nissui has transferred advanced trawl fishery technologies through business affiliations with local companies and has established joint ventures throughout the years. Nissui’s continued co-sponsorship with rugby has served to deepen the friendship and goodwill that have grown from this collaboration and has contributed to the promotion of rugby as a sport.
Nissui will continue co-sponsoring the All Blacks and rugby, doing what we can to help the rugby spirit of “fairness” and “One for all, All for One” permeate into society. 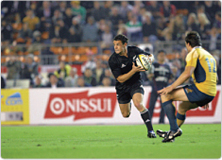 “Nissui Tokyo 2009 Bledisloe Cup,” the legendary game between the New Zealand national team and the Australian national team held at the National Stadium in Tokyo.

Nissui has been developing the SPORTS EPA brand, which utilizes EPA (eicosapentaenoic acid) in the sports field, and has continued to support the Japan Masters Swimming Association. Swimming requires endurance and overcoming the lack of oxygen, which swimmers experience during swimming competitions, is a major issue. However, swimmers can expect to improve their exercise efficiency and reduce the level of fatigue by taking EPA. Nissui supports the swim meets sponsored by the Japan Masters Swimming Association and encourages all swimmers so that they can perform to the best of their abilities until the finish line. 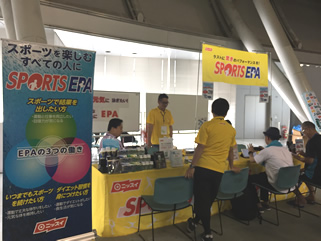 Co-sponsorship of the Women’s Sports Workshop

Since 2015, Nissui has been co-sponsoring the “Women’s Sports Workshop” held twice a year by the NPO, Montreal Olympic Volleyball Society (“Mon Sport”).
This workshop aims to further promote the participation of women in sports by communicating accurate knowledge on such topics as nutrition and sports medicine, encourage exchanges of information among the participants, and offer consultations. Lectures by experts such as active athletes, coaches, doctors, and researchers from various perspectives are offered and the participants can be entertained as well as enlightened on the environment surrounding women and sports. Nissui has been mainly educating participants on EPA and fast-twitch muscle proteins. Going forward, Nissui plans to work toward spreading accurate information and building an environment where everyone can enjoy sports regardless of gender. 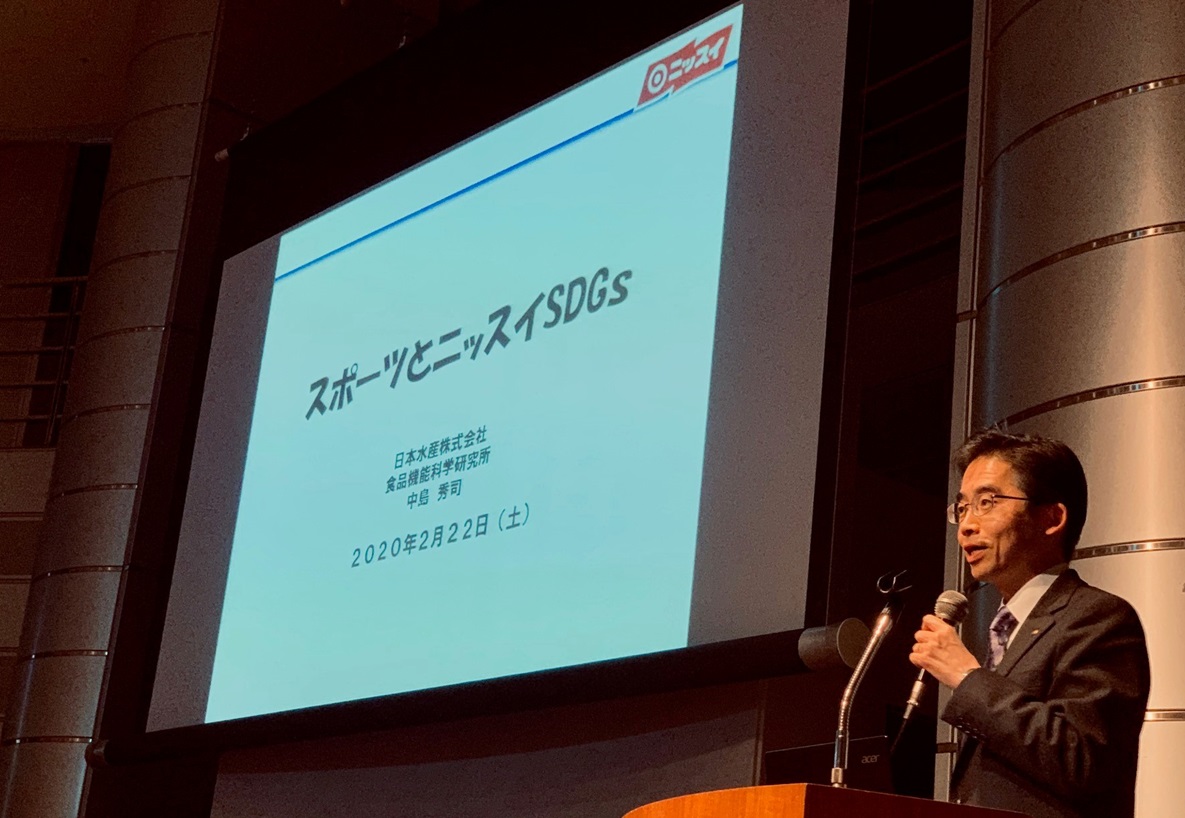 In Yunomaru Kogen in Tomi City, Nagano Prefecture, there is a sports facility called “GMO Athletes Park Yunomaru” where athletes can train in track and swimming in high-altitude areas of 1,730 to 1,750 meters. From fiscal 2020, Nissui, as the naming rights partner, is supporting the meals for athletes at Yunomaru Athletes Restaurant which adjoins the sports facility. Nissui supports the athletes with fish-based meals that contain fast-twitch muscle proteins and EPA, among others, and is considering opening the restaurant to the public in the future in order to support “sports longevity.”
Going forward, Nissui will continue to promote sports through fish consumption, encourage regional collaboration, and contribute to improving people’s health. 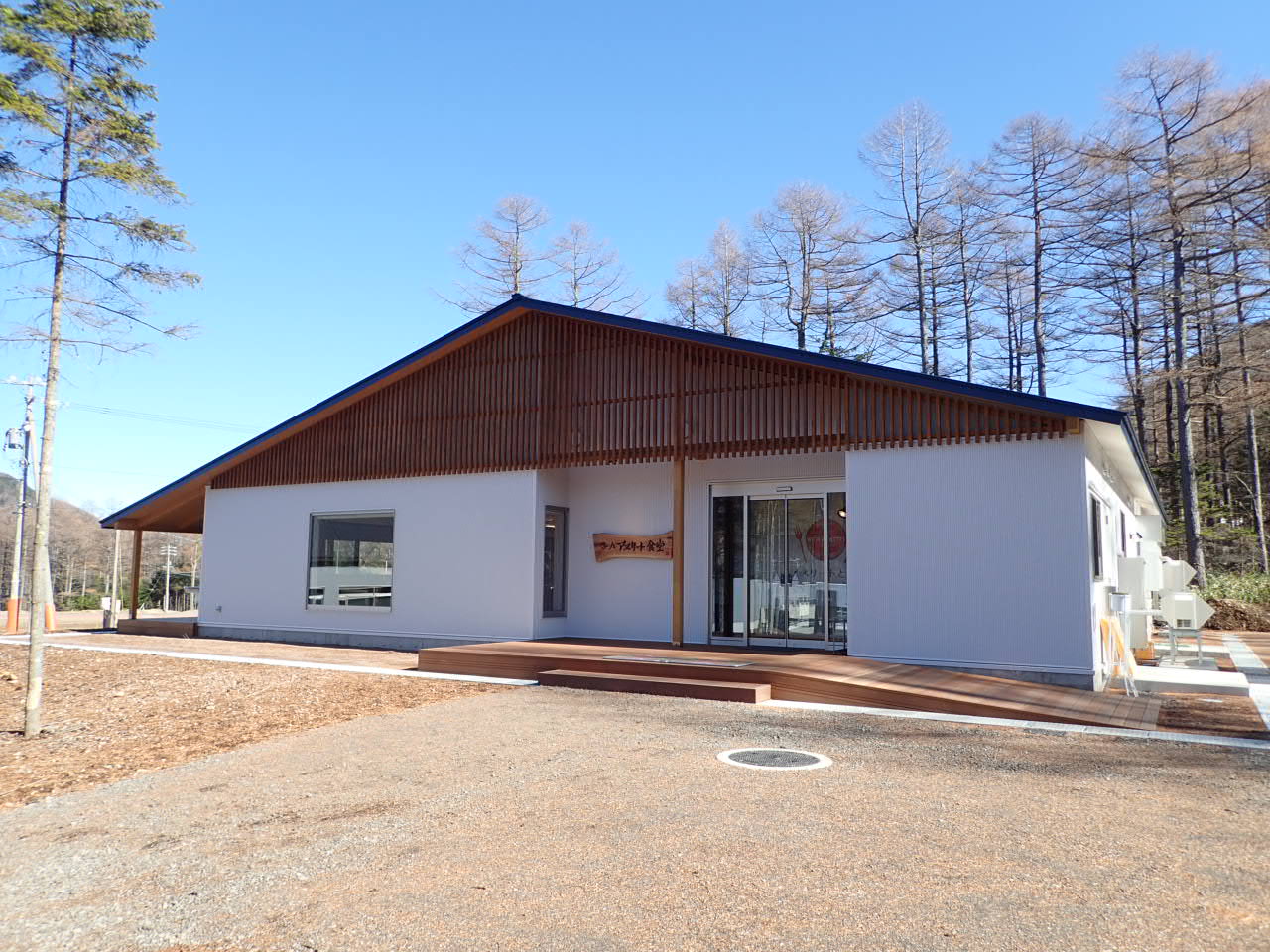