Nissui conducted a survey of resources at its Group companies (28 domestic and 16 overseas companies) based on the dealings and results of wild-caught fish for 2016. The total volume of wild-caught fish procured by the Nissui Group is approximately 1.5 million tons (live weight equivalent), which is equivalent to 1.6% of the total wild catch of the world. 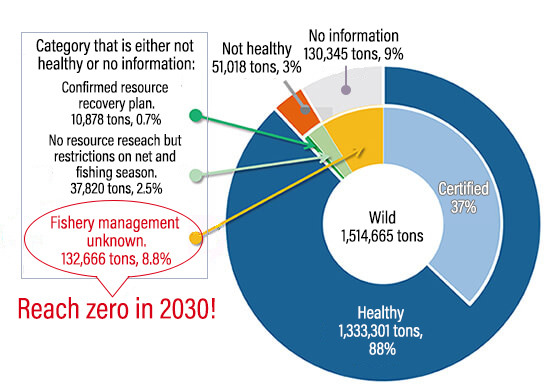 As a result of the re-investigation in Step 4, it became evident that 8.8% of the fish species had "no information as to whether fisheries management existed," mainly with regard to compound feeds. Nissui Group will make efforts to cooperate with compound feed manufacturers and enhance the traceability of such fish species. With regard to the other fish species classified as "no information," Nissui Group will continue to carefully observe their resource status and the countermeasures taken by fishing countries against illegal, unreported and unregulated (IUU) fishing, and take such action as making recommendations through SeaBOS (Seafood Business for Ocean Stewardship) to each country to conduct. 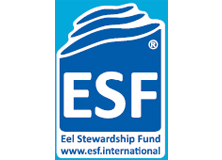 The Nissui Group does not handle resources that clearly have not been managed, resources whose status remains unclear, or resources suspected of being caught through IUU fishing or caught using forced labor. By continuing surveys on marine resources periodically, conditions surrounding marine resources, which are ever-changing, can be monitored to secure the sustainability of those resources. Further, to meet future market demand, we will work to manage resources in a sustainable manner.
Currently, the second survey, which looks at the period from January to December 2019, is underway, with research and analysis of the conditions surrounding the resources being conducted.

Australian Longline Pty Ltd. (Australia), which is one of the Nissui Group companies outside of Japan, is primarily engaged in Toothfish fishing in the Antarctic Ocean (subject to Marine Stewardship Council (MSC) certification).
In January 2021, Antarctic Discovery—a vessel owned by Australian Longline—became the world's first to acquire the Responsible Fishing Vessel Standard (RFVS) certification. RFVS is a fishing vessel-based certification program and is operated on a global scale by non-profit organization Global Seafood Assurances (GSA). Audits are conducted with respect to the safety and well-being of employees working on board the vessel from the viewpoint of human rights, in addition to fishing vessel management and catch traceability. Having acquired RFVS certification, Australian Longline has demonstrated to the general public that it abides by high standards in terms of welfare and safety for crew members on board its vessel and is not involved in illegal practices such as slave labor and poor living conditions. Australian longline acquired the RFVS certification for their new vessel Antarctic Aurora as well, in February 2021.
Furthermore, Flatfish Ltd. (UK), which is also one of the Nissui Group companies outside of Japan, contributed to RFVS as a member of the Technical Working Group of RFVS by such means as serving as a peer reviewer of RFVS in 2019 and 2020. Flatfish, which had been in favor of this certification scheme not only since the beginning at the time of its launch in 2006 but also upon its subsequent resumption in 2016, provided ongoing support toward its realization.

(Note 1) Tori line: A device that prevents birds from approaching the bait by towing a rope to which streamers and tapes are attached from the tip of a long pole fixed at the stern of the fishing boat; also called tori pole (Source: World Wide Fund for Nature (WWF) website).
(Note 2) Moon pool: A round well in a vessel's hull through which a longline is hauled in a longline fishing boat, which lowers the risk of wild birds being entangled than when the task is performed on the deck. It also helps ensure the safety of crew members. 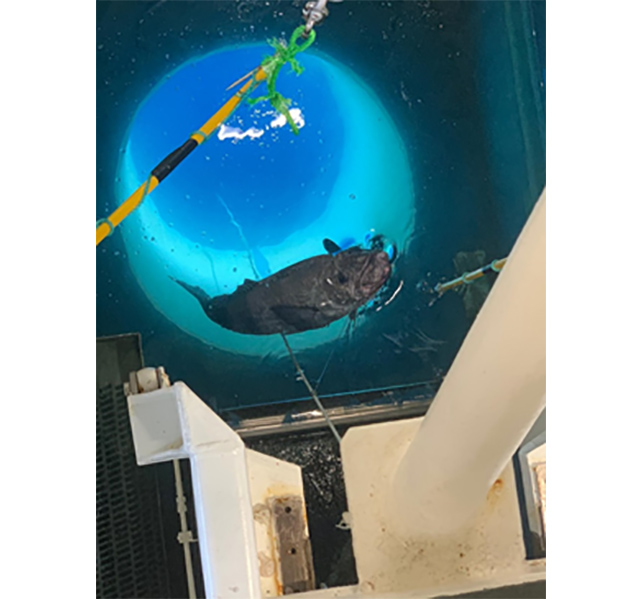 Gorton’s has been forming partnership with New England Aquarium (NEAq), Boston MA. USA, to preserve marine environment and secure sustainable marine resources. The partnership started in 2008 when Gorton’s asked evaluation of its seafood products from scientific and sustainable points of view and marked its 12th year in December 2020. 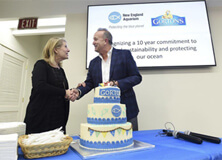 Along with Monterey Aquarium, NEAq has global knowledge of marine resource research and provides scientific and meaningful advice and support including movement of fishery, aquaculture, fish feed and breeding in the conduct of making efforts to promote sustainable fishery.
In addition, Gorton’s itself developed Sustainability Action Plan, and has been promoting the plan by exchanging opinion with NEAq and implementing progress management by setting KPI.

Based on the strong trust with NEAq until now, Gorton’s, member of the Nissui Group, will make efforts toward sustainable usage of resources and preservation of the environment in a positive manner.

In order to enhance the sustainable use of marine resources, innovations will also need to be made to the methods of fishing. The problems of fishing methods that destroy the marine environment and bycatch, i.e. the incidental capture of non-target species have been raising concern, and the development of fishing methods that cause the minimum amount of damage to living organisms and the environment has become imperative, for the sake of preventing the marine ecosystem from deteriorating.

The PSH method uses fishing equipment made of flexible PVC which inflates into a tube shape once seawater flows in, allowing fish to be landed live and still swimming, while undersized or smaller species escape through specifically sized holes along the length of the fishing equipment.

Scientific tests have shown that snapper harvested with the PSH system have a 100% chance of survival if they are fished from a depth of 0 to 20 meters. While the survival rates tend to decline with increasing depth, tests have proven that fish caught with the PSH system have better survival rates than those caught using other conventional fishing methods.
Hence, it is believed that the PSH system will be an effective method for studying deep sea organisms and catching fish in the deep depths of the ocean.

The four companies, mentioned above, through repeated trial and error including investigative research over the approximately ten years from the project’s launch in 2005, were finally able to commercialize (practical application) the PSH fishing method in 2016. The Sealord Group, Ltd. is currently expanding the use of the PSH fishing method and making efforts to contribute to the spread of sustainable fishery.