The Past, Present and Future of Nissui, Which Has Created Diverse Value from Marine Resources, Is Here

Since its founding in 1911, Nissui has contributed to society by cooperating with the people around the world and creating diverse value from marine resources.
To mark its 100th anniversary, the Nissui Pioneer Exhibition was established in order to convey this corporate stance as well as our Founding Philosophy to future generations. The exhibition displays the past, present and future of Nissui, which has created innovative value from marine resources.

Opening of the Nissui Tobata Building, in the Tobata District of the City of Kitakyushu, the Place Where Nissui was Founded

Nissui began with Ichiro Tamura, the founder of Nissui, sending Kosuke Kunishi to England to learn how to build trawlers. In 1911, the Tamura Steamship Fishery Division was established in Shimonoseki. In 1929, it was relocated to Tobata, where its role as a supplier of marine products was consolidated.

The Nissui Tobata Building was built in 1936.
In 2009, the building was given the “Kitakyushu Urban Beautification Award.”
The building is illuminated at night to 8:00 p.m. 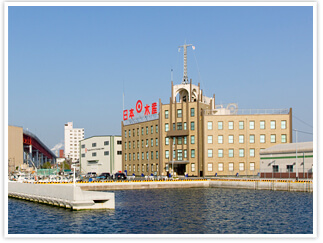 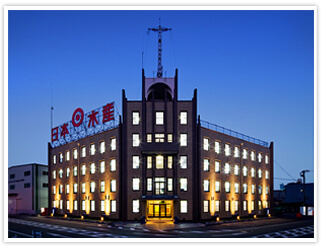